Calypso, the neighborhood bully, has become bored of his regular antics and, after seeing a demolition derby on TV, gets a great idea to have one of his own. Unfortunately, no one he picks on is old enough to drive a real car so he decides to set up a small brawl using RC cars instead. Now it is up to you to take control of one of many different RC cars and be the only one left standing (or driving, as the case may be). If you can turn Calypso’s vehicle into twisted metal, he’s agreed to grant you a single wish.

What’s in a name? The gameplay, that’s what. This game is all about destroying your opponent’s vehicles. The 'Small Brawl' part refers only to the RC cars and not the action. There are a few different modes of gameplay, depending on whether you play with one player or two. The first in one player is tournament mode, which is the main storyline based game. Battle your way through eight different levels and take on Calypso at the end. Challenge mode is the same as tournament, except it’s one level only. Endurance mode is you vs. one other car at a time and you get one life to destroy as many cars as possible. Two players can go Head-to-Head or Free-For-All, or they can play the one player tournament in Cooperative mode. There are plenty of locations, weapons, and characters/vehicles to choose from. The locations vary from the playground, to the miniature golf course, to a movie theatre, and many others. Different weapons and items are scattered around the areas and you’d be well advised to learn what each is and how to use them. The weapons are mostly in the form of firecrackers and other small fireworks, but to an RC car, that still spells danger. There are also some additional weapons and defenses that you can perform by doing some control combinations a la Mortal Kombat style. Each distinct character/vehicle has its own unique charm, as well as stats such as armor, acceleration, top speed, and handling. Based on these, the vehicles all handle completely differently from each other which also makes how you play the game different too (i.e. hit and run as opposed to stay and fight).

I found the controls and general handling to feel sloppy, even on the cars where the handling attribute is high in its stats. The controls are also a bit confusing at first since every button on the controller can be used (even pushing the analog sticks in has function!). On the plus side of this, it’s nice to see a game that makes use of the push buttons of the analog sticks as well as using both analog sticks. There are three different pre-defined control configurations, but they’re all almost exactly the same except for a button or two, which makes this an almost useless option. One very annoying aspect to the controls is that the analog gets turned off between each level and must be turned back on. The biggest handling problem, though, is the lack of gravity on all levels. If you jump or explode in such a way that you fly off the ground, it takes a while to actually land. It felt similar to a game that might take place on the moon.

The only part of the interface I found clunky was saving/loading the game. Most games will ask you to create a save file when you start for the very first time whereas this one says it can’t find a save file and recommends you don’t start without one, yet you cannot make one until you actually get into the game. There seems to be too many prompts when trying to save and continue your game. The rest of the interface is simple and straightforward. There really isn’t much to the game in terms of options -- just difficulty settings, controller setup, see the credits, save or load your game, or watch the unlocked movies. The movies (or cut-scenes) in this game are actually worth watching. Each time you finish the tournament with a different character, you’ll get to see their wish. This also unlocks that movie so you can watch it later if you wish.

There are other secrets to unlock as well, such as additional characters/vehicles and battlefields. It’s up to you to figure out how to unlock them (or you could cheat and look online to tell you how, but you wouldn’t do that, now would you?)

Twisted Metal: Small Brawl supports two players on one PlayStation console via a horizontal split screen. As with most multiplayer games, it’s always more fun to play against a live person. I did find that the car on the split screen took up a lot of the space and it was sometimes hard to see around it. This game would’ve been a good candidate for using the multi-tap, but then it probably would’ve been even harder to see what was going on.

Some old-school gamers like myself will remember way back when you’d go to the software store and find a game that looked really cool on the box. You’d pick it up and then get it home only to realize that those pictures you saw were either doctored, from a different higher-end system, or were part of a cut-scene rather than gameplay. Twisted Metal: Small Brawl will let you relive those memories. The graphics on the back of the jewel case, as well as the screenshots here, show nice bright playfields but that certainly isn’t what I was seeing on my TV. The general brightness and colors seemed really dull for the most part and on some levels (most notably the movie theatre one), the level was simply so dark that I couldn’t even see where I was going at all. I cranked up the brightness on the TV as far as I could and it helped, but it was still really dark. So you might be thinking 'Get a new TV, stupid,' but other PlayStation games look just fine.

Aside from the brightness issues, the graphics are below par for a newer PSX game. They seemed to be a little blocky like some older games and in some cases I couldn’t even tell what some of the props, such as the golf balls on the miniature golf level, were for awhile.

While the gameplay graphics aren’t that great, the cut-scenes looked really nice. Those graphics did seem pretty bright and looked much more like what I’d expect from a newer PlayStation game.

Well, it’s got music and sound effects. They aren’t bad, but they aren’t spectacular either and they’re certainly nothing to write home about. In other words, you can take ‘em or leave ‘em and that’s all I have to say about that.

Aside from the general gameplay, the docs tell you a bit about each of the characters and their vehicles. It also explains what each of the weapons are and what they do. While it's certainly not necessary to read the docs to play, you may want to have a quick look at some point to make sure you didn’t miss an easily overlooked feature.

For the most part, this is just another limited-frills car combat game. It didn’t seem to be really original aside from the myriad of different characters and vehicles. Except for the cut-scenes, the graphics weren’t too exciting and the sound is just blah. The sloppy control and light gravity also don’t help too much. Despite all this, I still found this to be a fun game once I got the hang of it and I also found myself becoming strangely addicted to it. The challenge seemed to be just right and there’s certainly replayability here, especially in the two-player mode. While I wouldn’t recommend this game immediately to anyone except maybe Twisted Metal fans or die-hard auto combat junkies, I would recommend it if you see it on the discount rack for $10 or less, which is why I give Twisted Metal: Small Brawl a score of 75. 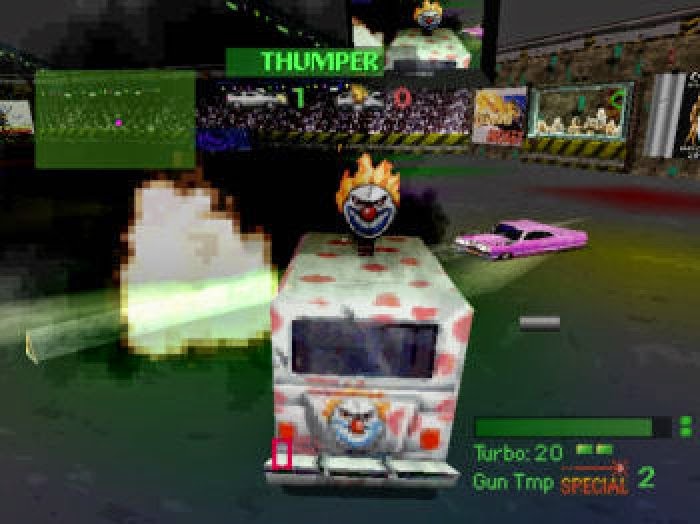 Twisted Metal 2 download free. full Game (known as Twisted Metal: World Tour in Europe and Twisted Metal EX in Japan) is the second and most successful game in thevehicular combat series, Twisted Metal. It was developed by the game studio SingleTrac, published by Sony, and released in 1996 forPlayStation and Microsoft Windows.

Two years after its release, Twisted Metal 2 was re-released as a PlayStation Greatest Hits game, however under the developer 989 Studios instead of SingleTrac. It was also released for download in Japan and North America on the PlayStation Network in 2007.

In concept,Twisted Metal 2 is ademolition derby which permits the usage ofballisticprojectiles. Players choose a vehicle and an arena—or a series of arenas in the story mode—to engage in battle with opposing drivers. A variety of weapons are obtainable by pick-ups scattered throughout the stage. The objective of the game is to be the last remaining player.

2006: Los Angeles is in ruins and its citizens left to struggle for survival after the conclusion ofTwisted Metal, a brutal contest held by Calypso, exactly one year earlier on Christmas Eve. Aboard his airship (running the ticker «CALYPSO RULER OF THE EARTH») in the skies over the destroyed City of Angels, Calypso wonders where the next Twisted Metal will take place; fourteen of the world's best drivers are already assembled to compete for whatever prize they desire. Ultimately, Calypso decides that the world itself shall serve as a battleground. In addition to the remains of Los Angeles, drivers will also battle in Moscow, Paris, Amazonia,New York City, Antarctica, Holland, and Hong Kong. Twisted Metal 2 Free Download PC Game. 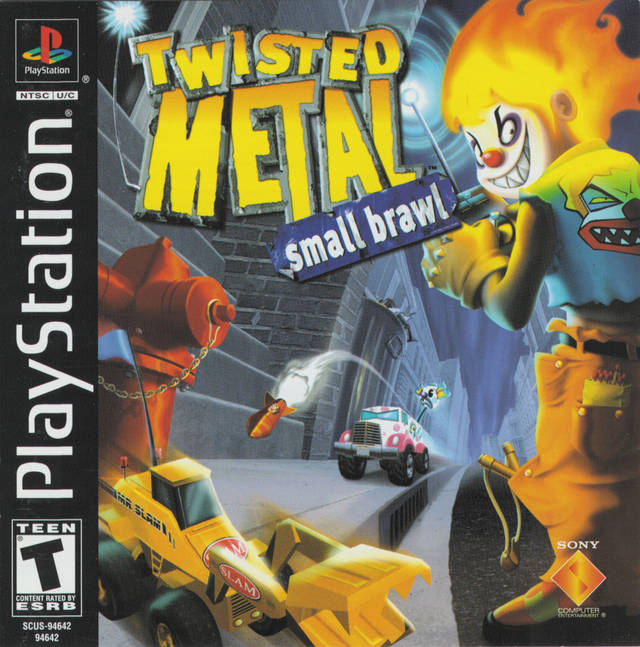 Twisted Metal 2 was both a financial and critical success. The PlayStation version sold 1.74 million copies in the United States alone. The PlayStation version has an aggregate score of 86.44% on GameRankings, based on eight reviews. The PC version is claimed to have averaged at 49.50% on the same website, based on two reviews, though many other reviewers are in favor of said version too.

Frosty Treats, a major ice cream truck company, filed a lawsuit against Sony contending that Twisted Metal 2 infringed on the company's trademarks through the use of the phrase, «Frosty Treats», as well as similarities between the video game clown, Sweet Tooth, and the company's own safety clown. In Frosty Treats, Inc. v. Sony Computer Entertainment America, Inc., the U.S. Court of Appeals for the Eighth Circuit ruled against the trademark claims because they were either too generic or were unlikely to cause confusion among consumers. Twisted Metal 2 for PC.

Click on below button to start Twisted Metal 2Download Free PC Game. It is a Full Version PC Game. Just download torrent and start playing it.

How to install any game on a PC?
Say 'THANKS' to the admin! Add new comment